Legend of Zelda: Our Time to be A Hero

Legend of Zelda: Our Time to be A Hero

Welcome to Hyrule! A land of adventure, trouble, and heroes. Ganon has been gone for years, and it doesn't look like he's coming back. Though, great evils still exist in the world and Link is only one man/boy. The Hero of Time often gets the spotlight through the many histories of this beautiful land, but what about your story? Surely, the green capped gent can't have the only story worth telling?

This is for the Heroes who didn't quite get their time in the legends, and aren't emblazoned on stain glass windows. The heroes who deserve their time to be the Hero. It's your time! So welcome one and all to your story.

This story takes places roughly forty years after the events of Ocarina of Time. It includes content and lore from Majora's Mask and other games that take place within this version of Hyrule. The opening area will be Hyrule's Castle Town, but feel free to set off into the wild blue yonder! 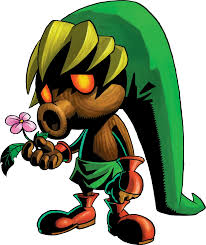 Edits: He isn’t wearing links attire with the blonde hair. It’s just the only model I can find. He wears a bright blue top hat that looks like trickling water, a small purple mushroom sprouts from the top of the hat. He has matching blue gloves and boots. He wears a grass stained white coat with long coattails that drag on the ground behind him. His eyes are a mossy green.
Racial Abilities: (Powers that stem from your genetic lineage, like the Kokiri Children’s Fairy’s or the Zora’s aquatic abilities).
Green Gibber- The tongue of plants! All deku can talk to the flora with a deceny fluency.
-Pad specializes in the dialect of aquatic plants.
Acorn Scatter- They can grow, and fire a deku nut from their spout like mouths. It doesn’t do a lot of damage, but boy does it sting!
-Pad alternatively can spout water at his foes! Though, he has to store it first, so it is limited usage.
Burrows- Deku’s make use of special burrows like potted plants, this allows them to jump far into the air, hide, and even travel!
Personal Powers: (Powers you trained in, unique to you, or granted by some higher force)
Fungal Fury- the special mushroom on top of Pad’s hat is actually rooted to his head! The Hat doesn’t come off. He can let loose spores that make people sleepy, angry, or even replicate the poppy dog nature of first love.
Deku Pad- Most deku’s have the Deku leaf that lets them drift through the air, but Pad hates heights! His presence in the Zora Falls has sprouted a unique deku leaf. It’s a lily pad! It allows him to surf and travel along the surface of the water. It even stays wet and slick on the bottom to allow limited use on land.
Nature’s Hand- Deku are incredibly attune with the forces of nature, and can call upon it when needed. This connection is most often expressed through music. When Pad plays upon his fiddle, he can spring forth wonderful plants of all shapes, sizes, and colors!
Waterlog No More!- Deku are often susceptible to water and the effects of over hydrating. Pad can hop, skip, and jump through the water all day without fear of getting his roots too soaked.

Background: It isn’t uncommon for Deku seeds to be thrown far and wide throughout their travels, but it isn’t everyday that one decides to sprout so far from where the great Deku tree once stood. In the falls of the Zora people, one seed lied upon a lily Pad, and drifted down into the caverns of the Zora. It latched onto the pad and began to draw its nutrients from the water through the lily Pad. The Zora people had never witnessed the sprouting of a Deku before, and it’s care became a matter of public interest. People took shifts reading to the young seed, playing with it, sharing stories and secrets with it. The royal family granted him the only sliver of cavern that light shone down. Normally the Queen’s very own spot to reflect on during the day.

Months and months of care for the young seed, and it sprouted legs! Just a funny looking acorn waddling back and forth on the lily pad, often falling into the water and needing to be plucked back out.

Soon a head popped out, with big mossy eyes and a tiny purple fungi growing right on top of his head. His arms came days later. The little creature barely knee high, and curious to all its surroundings.

The Zora named him Pad. Or Lil’ Pad, after the Lily Pad that made his cradle for oh so many months.

Pad became like a little prince, and taken in by the Zora as a son of the water. Though he never did quite get the hang of being a royal. He was always running off, and finding nooks of spores, and dribbling water that made the most beautiful little tune.

He raced amongst the Zora, and often bested them on his beloved Lily Pad.

One day, he ventured far too far from the reach of the Zora Guards, and the protections of the waters in the dead of night, He was chasing a sliver of moonlight that glanced along the waters, and he wanted to know where it ended.

He stumbled upon a Poe, a ghostly looking fella who basked in the moonlight. He walked straight up to him and began to chat and gleefully introduce himself. The Poe and its companions had other plans as they threw him from the top of a waterfall, saved only by the crashing waters.

This instilled two things in our dear little Pad. A debilitating fear of heights, and the desire to go out into the world, and find all the bad people, and make good from bad.

He’s spent years training and practicing to best the big wide world. And Today’s the day! With a brand new coat, and this cool hat that fits on his mushroom, and a lot of big plans. Pad is gonna Save the Day!
Weaknesses:

Weapons:
A dazzling personality.
Deku Nuts
Water
The Pout.
Extras: The Mushroom on his head is named Fountain! Fountain is cool, a real fungi.


And of course the form!