I've only had Robin for an hour, but if ANYTHING happened to her, I would kill everyone in this room and then myself. Accepted.

Though I never got the chance to properly reveal her, the world deserves to see Amon's form!

How bad can she be?:
Full Name: Amon (Formerly Moniel)

Orientation: She'll try anything once.

Personality: Amon has developed a borderline-anarchic discipline as a result of her upbringing and philosophy. She has conditioned herself to believe that might makes right and that it is better to claim your fate rather than wallow in the pit of indecision and hesitance, and that mindset is reflected in her whole being. She is smart and cunning, but also selfish and cruel, ready to abandon her fellow man whenever convenient and torment her lessers whenever desired. She is envious at her core, a jealous woman who cannot stand to share her accomplishments with anyone, which only serves as a driving force behind the sadism that led her to her prestigious rank.

Strengths: Crafty and devilish, physically strong, skilled with polearm weapons, good horse rider, and relentless in the pursuit of her goals and desires.

Weaknesses: Little respect for rules or social norms (outside of some exceptions), sometimes unable to grasp the bigger picture, unskilled at running long distances. 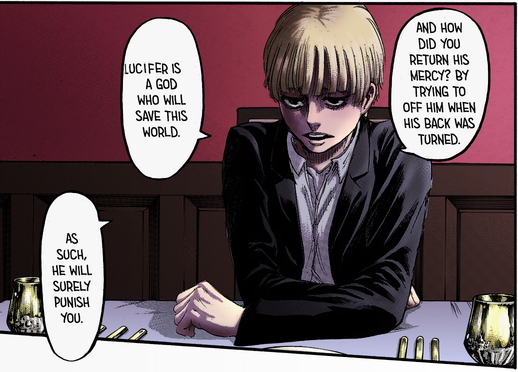 Height is about 6'3". Has small horns growing under her hair. 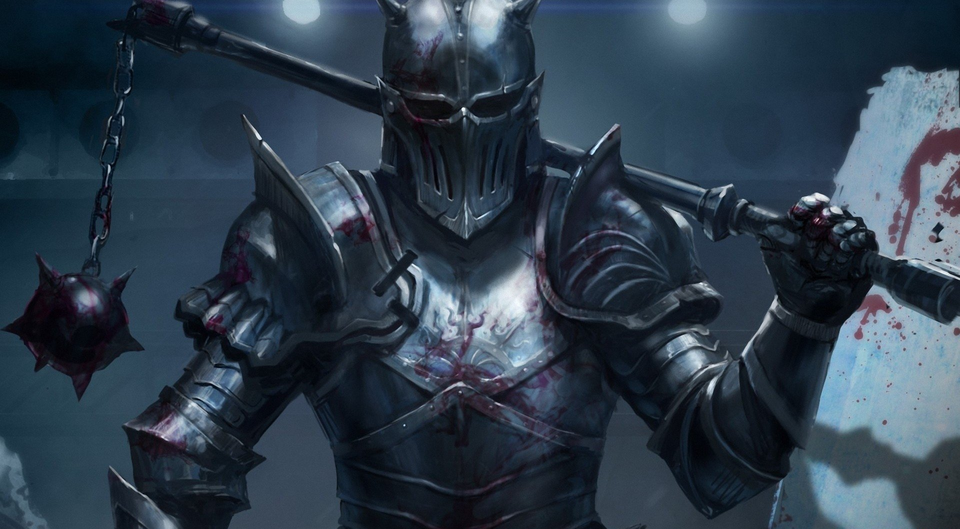 Bio: Amon was conceived as a product of a Sheolfolk raider raping an Elysian woman during an attack on a settlement within Jehiliath. Sadly, these circumstances of her birth have defined the rest of her life. Amon's mother resented her existence and reminded it of her frequently, at least whenever she wasn't completely ignoring her. Amon herself (then named Moniel) responded to this lack of stimulus by acting out often, developing a reputation as a delinquent and troublemaker.

These petty acts advanced into more serious crimes that saw her in trouble with the authorities frequently. Shunned by her mother and every social circle that knew her, young Moniel took retribution on the people who had never shown her any kindness by opening the gates to an invading army of Sheolfolk- not just any army, but the Wrathmongers. Survivors of the ensuing massacre believed that Moniel had died in the carnage, but that could not be further from the truth. Lucifer was impressed by her young age and fanatical hatred, and took her in. She was not just any Wrathmonger conscript- Shockingly, Lucifer took her under his wing and mentored her as if she was his own daughter. Soon after, she christened herself Amon, throwing away her Elysian name.

Until that point, the Sheolfolk were only an idea to Amon. Resented by the Elysians and Homini that surrounded her, she began to idealize and romanticize her unknown Sheolfolk father, seeing him as a champion that acted purely for his own self-interests. It was this selfishness that led to her birth, afterall. She began to see her mother as weak and foolish, unable to kill the unwanted daughter that burdened her life- history would forget her. Now she had Lucifer, and while he brutally beat her frequently, Amon knew it was purely for her own betterment. She preferred the parent that would harm her out of love rather than ignore her out of shame.

Several disciplinary beatings, successful wars, and Klingon promotions later, Amon had reached a considerable rank within the Wrathmongers, and her newfound skills in tracking made her right at home in the Vanguard Corps. It was around this time that Lucifer took in a second child much like he did Amon- A two year old Elysian boy with no living family members. Lucifer named him 'Obedience' to foster loyalty, and Amon hated him from the moment she laid eyes on him. How dare Lucifer adopt another student when she was already perfect?

From then on, whenever Obedience was beaten to be taught a lesson, she'd always be there to point and laugh. Whenever she was brutalized by father, she made sure to inflict the pain and humiliation she felt on Obedience later. They quarreled constantly, and she never stopped tormenting him. After nearly a century of knowing nothing but the Wrathmongers, Obedience came to a critical disagreement with Lucifer and left the organization permanently after a night of shouting, brawling, and clanging. Amon no longer had any competition for Lucifer's love. She continued to serve in the Wrathmongers, until finally she challenged and killed the commander of the Vanguard Corps, taking his position and ascending to the Crimson Thirteen.

Notable Relationships:
Lucifer – He cared for her when no one else did. He humbled her with physical violence for her mistakes, but at least he paid her attention, something no other parent of hers did. Today, she serves faithfully under Lucifer, disagreeing with him violently and often but remaining a loyal lieutenant nonetheless.

Oberiel – She knew him as 'Obedience’ and resented the fact that he was chosen by Lucifer much like her. The General treated him like a son, and Amon couldn't stand it, treating him with contempt and worse. Today, if she saw him, she'd kill him, laughing and mocking him all the way.

Her mother – Amon hasn't seen her for centuries. For all she knows, she could be dead. She hopes she isn't, as she has a point she'd like to get across before the end of times. That point? Never rest while the people you've wronged still draw breath.

Fun Facts: Despite working closely with equestrians, Amon has no preference for the animals and regards them as 'stupid, dispensable beasts'. She keeps tally marks on her saddle representing the amount of horses that have died while she rode them.

Personality: Amberlyn prides herself on her level head; while other Generals fall to decadence and ego, she keeps her eyes on an prized endgame: Sheolfolk dominion, and Ahriman at the height of his power.  There are few personal touches Amberlyn allows herself in her decor or her demeanor.  If she stoops to cruelty, it has a goal.  If she oversteps, it's part of a plan.  Truthfully, Amberlyn's too old to be as single-minded as she feigns, but all the messy parts of herself Amberlyn slides to the side, only opening it with concubines and within private feuds.  Amberlyn prizes intensity, and seeks out those who'll give her back as great as she gives.

Strengths: Amberlyn's a practical entrepreneur who doesn't bother with self-delusion to get herself through the day.  She's smart, she's ruthless, she's gorgeous, and she has the resources and the ambitions to organize the downfall of most major political figures.  No-nonsense, thick-skinned.

Weaknesses: Amberlyn's got a body that's easy on the eyes, but apart from keeping herself fit, Amberlyn's never seriously been prepared to kill; she relies on bodyguards and private armies to keep herself safe.  Stubborn as h*ck.

Bio: The Shikobas are one of the several noble houses of Morgul; on the broken backs of Homini slaves, the Shikobas amass wealth the likes of which their beaten-down property could never dream of.  The Shikobas own several slave camps, some public (open to all for Bonding, for a price, and slaves are usually used for manual labor and kept desperately malnourished), and others private (higher cost, better slave treatment, selective in who Bonds to whom, slaves are conditioned to obedience and trained to kill.)

Amberlyn never went through the harrowing other Sheolfolk children went through at fourteen, nor did her siblings: instead, she was trained in business management. Following the mysterious death of her parents, Amberlyn took up the mantle of matriarch and subsumed the various family businesses under her rule at a mere 21 years old.

None of Amberlyn's heirs are her biological children.  She pairs a handmaiden or concubine with a viable, politically prominent man, has the father sign away their rights to their child, then sterilizes and rears the resulting spawn as her own.  (The parents of these children receive stipends, holiday visiting rights, etc., and death should they argue with the arrangement.)  Amberlyn's children are raised as heirs to her fortune and operatives of the family slave trade operation, the eldest always acting as Knight-heir, her voice and diplomat in all matters of estate.

While she’s lost her place as Mammon since the Sundering, Amberlyn keeps a generalship of another kind: a private army conscripted from the Shikobas’ many debtors and slaves, and a security team bought out from the Wrath sect.

She’s a devoted follower of Ahriman, and everything she’s done, from the Homini slave camps to her private money-wars to the way she’s abused and manipulated her siblings, has all been to Ahriman’s glory and honor.  Her family crypt serves as foundation to her private shrine to Ahriman.

Allegiance: Ahriman, and the Shikoba line

Accepted, of course, my dear Zachary.