Accepted!!! AHHH IM SO GLAD YOURE BACK WELCOME BACK THANK YOU SO MUCH FOR JOINING

pєrsσnαlítч:
Trinity is offhandedly known to be a milder version of a Tsundere while all the while being brutally honest (or just plain honest), social when she needs to, and daring. Because of how she acts outwardly she tends to get into trouble with people, mostly in the sense them not being able to handle her intimidating presence. But nonetheless she’s a wonderful comrade to have and a frightening enemy.

Along with that, Trin is also pretty competitive and enjoys competing against other Campers--but at the same time knows how to understand you will win or lose (which probably comes from the fact she’s Nemesis’ child) and often goes by the theory of balance. But with that in mind that will not go easy in what she does and rather it makes her more passionate in what she does.

In the end Trinity hides a lot of the soft side she possesses. Taking what she feels for a weakness. So from that she rarely shows how really kind she is. 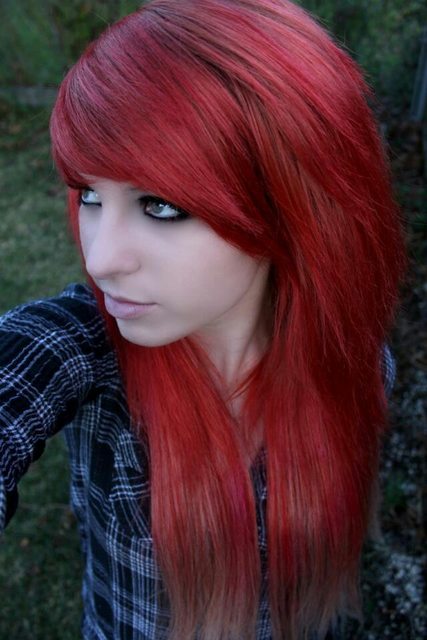 pσwєr(s)?:
Equivalent Exchange (Switch a weapon into a different weapon(s) of equal value.)

вαckstσrч:
Trinity was born in West Virginia. She lived in a decent sized house with just her and a father, Nathan Siever, who worked as a lawyer. She never got to meet or know her mother; all she knew was that she had left them.

Trin wasn’t very good in school, considering she had ADHD and was Dyslexic, which made her father very unhappy with her and usually he would ground her or disown her for not “trying hard enough”. Trin nonetheless was a very lively kid and played a lot of sports with the neighborhood boys.

Like all half-bloods, Trinity saw monsters since she could remember. She had an issue being outside alone or even being by herself at all. From this she began to develop paranoia that she still suffers from today when she’s in a room alone.

After some time when she reached the age of 12, Trinity was taken to CHB by a Satyr named Reed. She only left a note before she left, letting her father know she was going away for a while and would be back one day.

wєαpσn(s):
Variety ~ Sword made of Celestial Bronze; this is her main weapon but with her power she is able to create different weapons out of it. (Only knows how to make it into 3 daggers or an ax at the moment)

strєngths:
x Not afraid to speak her mind.
x Daring, not afraid to take chances.
x Good working in teams.
x Knows how to use weapons/her powers.

wєαknєssєs:
x Has a temper that can blind her at times.
x Her powers are very limited.
x Not good strategically.
x Suffers from Paranoia

σthєr?:
x When left alone for long periods of time she gets Paranoia. However, it's not as bad as it used to be. Especially while in her own cabin or at camp, it rarely ever happens. It'll mostly occur when she's at her father's home our outside of the camp borders.
x After she came back from visiting her father she got a ring made of gold and silver with her three birthstones engraved in it. (yes it is all real.)
x Oh and she's heterosexual I guess.

Biography: Tara was born in Miami. Her mother, a doctor and a demigod herself, was well-equipped to deal with any monsters that could arise, so Tara grew up knowing of her heritage. Naomi Linden didn’t want her daughter to go to camp. She didn’t want the little girl in pigtails to learn how to swordfight, to lose her innocence (in more ways than one). She kept her daughter ohsoclose to her heart, and she didn’t want to let her go quite yet. But from a very young age, Tara saw camp as the be-all-end-all. She could hardly wait for the day that she left for camp, and every single year would bug her mother about it. Eventually, Naomi realized there was no way to keep her daughter away. Tara was too much of a free spirit. Before she could tell Tara of her decision, a monster attacked. Naomi was seriously injured, and thirteen-year-old Tara would be the one to end up killing it. Tara made her own decision that day, when the dust settled. She had looked death in the face and decided that she needed to train up to better arm herself against the forces that worked against demigods. And so Naomi sent her daughter off to camp, knowing that she was sending her into something she could never take back.

Personality: Tara is overwhelmingly open about everything. Everything. She is also rather honest, sometimes brutally so. But Tara is a hate-filled person. She can be rather mean, and, in fact, hates pretty much everyone until they've wormed their way into her heart, whether accidentally or on purpose. She is cold, unforgiving, and can be harsh. However, to those who have gained precedence, she is bright, sunny, kind, and one of the nicest people you will ever have the pleasure of meeting. She doesn't love many, but to those she does, they are her entire world, and she would willingly die for them.

Ability: Tara has a natural talent for singing and slight medical instincts, as a daughter of Apollo. Her only actual "power" is her light powers. She can manipulate light, as well as extinguish it (when in smaller amounts, she wouldn't be able to extinguish the sun) and, in certain cases, create it. The light that Tara creates emanates heat, which can be slight or burning depending on the brightness. Tara cannot be burnt by her own light.

Weapon (if any): A sword that has been imbued with pure light itself. The blade gives off an almost ethereal light, and is hot to the touch. Tara can be burnt by her own sword.

Strengths: She can sing very well, and play the guitar at a mastery level. She is skilled in swordfighting, somewhat in archery, and very much in debate. She also has no shame nor many filters, which can be both a weakness and a strength, depending on how you look at it.

Weaknesses: She can be easily influenced by her friends and loved ones. Again, she has no shame nor many filters, and as cold as she can be, she is too warm-hearted for her own good.

Both accepted but for Tara she has to have a normal sword for now! Thanks!