(I know i actually should start by bringing Red here, but i decided to make Gold more of an exclusive to here, while continuing Red on DA. not only that, but even though it is a sequel, it honestly doesn't come into play until the post game story. because, as most of us know, Gold and Silver's post game takes place in Kanto.)


Opening theme: Word of the Voice by FLOW
The Character Analysis Page

Character name: Ryuga Kurosaki
Age:10
Appearance: Coming Soon! (Currently Drawing!)
Personality: Pretty aloof most of the time, he prefers to be oblivious to things around him in order to keep his spirits ever high. he usually brushes things off like they're no big deal, and by that I mean he just says that things happen and if you lose something then that's just life.
Bio: When he was younger, he had a grandfather that he loved dearly. he used to always go visit him in Cherrygrove City every weekend he had the chance to hang out and play in the flower gardens. his grandfather once gave him his gold wristwatch to wear as a good luck charm. one day, he left to go do his monthly fishing trip to the Lake of Rage (a pretty long hike, i know. but he had a team of Pokemon, so it was fine.) when he never came back. it was later revealed that he was attacked by a strange red colored Gyarados and killed in the lake. after that, Ryuga's personality took a dive down south. eventually, he stopped caring and just lost the will to value things since, to him, they'll eventually disappear anyway.


Character name: Marie Van Eltia
Age:16
Appearance: Coming Soon! (Will Get to Eventually!)
Personality: The analytical one who tries to come up with the best strategy possible for the current situation. she's a bit of a bookworm who loves looking into the rich history of the Johto region and all it's mysteries surrounding the Legendary Pokemon of the past, like the Legendary Beasts and Ho-Oh in particular. sadly, being up in books rather than out in the streets, she's rather uneducated in the way of socializing. once you get to know her, though, she can be a pretty nice person.
Bio: Coming Soon!

Character name: Casey Doom
Age:18
Appearance: Coming Soon! (Will Get to Eventually!)
Personality: Being a strange hybrid between a human and a Houndoom, his appearance would normally scare away folks, which in turn causes him to be more secluded and shy due to not being able to make much headway in terms of social interaction. like Marie, he's friendly once you get to know him, but for some reason his mind changes from time to time, causing him to act more feral and more alert, cautious and overall aggressive. he switches back, but that's kind of another reason why he's so shy in the first place. he doesn't want to hurt anyone.
Bio: Not much is known about his past. in fact, he doesn't know either! he woke up one day in the Iilex Forest, alone and with a severe case of amnesia. all he can figure out is that maybe all these strange dreams he's been having since his awakening might be connected to his past as they seem to be events that will or may have already occurred. 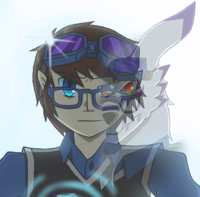